Clay targets were originally developed for bird hunting practice.  FCGC offers skeet, trap, sporting clays, or five-stand. We have them all!

FOCUS ON THE LEADING EDGE OF THE TARGET…NOT YOUR BARREL!!!! 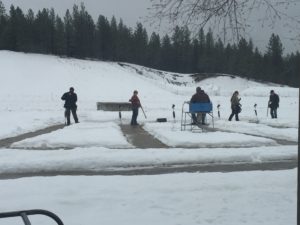 New shooters are often frustrated at not being able to break targets consistently, no matter how hard they try. One of the most common mistakes is failure to focus on the target rather than their gun barrel.

Most new shooters mount the gun, sight down the barrel, and look at their front bead. When they call for the target their eyes are focused on the bead rather than on where their target will appear; this results in shooting behind the target. When the shooter looks at the front bead, the gun doesn’t move with the target and will result in a lost bird.

Fees per round of twenty five targets:
Trap