Many of the members of the Fort Colville Gun Club (FCGC) have inquired about the beginnings of the gun club. Many of the founding members are no longer with us to provide the history and so this page was created to answer some of the questions with the memories graciously provided by William W. Campbell III.

Spokane Gun Club  was established in 1892 and many  of the Colville shooters traveled to Spokane, WA to  shoot. Many small communities not wanting to travel 120 miles (round trip) to shoot began to build their own gun clubs in their communities..

Back in the early 1900’s gun clubs were becoming popular in Washington State and if one wanted to shoot trap or be involved in rifle and pistol  competitions they would have to travel to Spokane in order to use the trap fields and ranges set up by the Spokane Gun Club.

In 1926 a group of local men decided to build a gun club in the Colville, Washington area. The first challenge was to find enough land to create what they wanted. Al Miller had a piece of property(13.67 acres) that he donated for this specific purpose. Along with Al Miller  were several other men that were involved: Frank Johnson, Carl Miller, Herb Minzel,Ray Cox and Gordon Cox.
The original Fort Colville Gun Clubhouse was built around 1928/1929. It was constructed from Cedar logs that were milled to fit together by Conner’s Mill. Harold Conner was a Member of the Club . 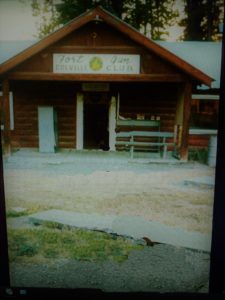 The club was named after Fort Colville, an army post near the club. The club  had one trap range that was operated on the weekends for anyone that wanted to shoot clay targets.
A picture of the founding members (taken in 1935) shows how a small group of men made a dream come into reality. 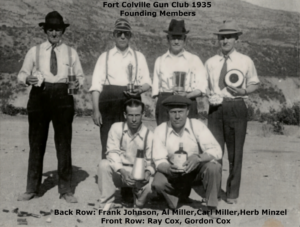 The club had frequent trap, small bore rifle and high power rifle fun shoots along with BB gun shoots for kids. As a boy, William W Campbell III was  mostly involved in small bore rifle shooting. Age 10 thru high school. The  club hosted turkey or meat shoots. (contests to see who was the best shot). Lots of clay targets, small bore rifle and deer rifle shooting. At one point there was a cable that had a deer cutout that was released from a high point on the range and allowed rifle shooters to try their hand at shooting a moving target.  There were also games inside the clubhouse  (ie bingo, cards, etc)  and wonderful potlucks with delicious food.
In the late 1940’s most of the Business men and Farmers around Colville were members of the gun club. Everyone had firearms and they all hunted and shot whenever they could.The  yearly fee to be a member was  $20.00 .There were no fences or gates so anyone could come to the club grounds, set up a target and shoot rifle or pistol. Clays were usually shot on the weekend by whoever showed up. In the beginning there were no electrical trap throwers so there was need of at least two people to operate the hand trap thrower. One to load the trap thrower and cock the throwing arm and another at the trap handle that was pulled when the participant called out “pull”. The participants would stand in a line and wait for the trap apparatus to be loaded with a clay disk (pigeon) cocked and be released upon their command of “pull”.

During the late 1940’s, after WWII a lot of local veterans returned to the Colville community and became members again so our club grew and upgraded a lot of the old equipment.

In 1951 the city of Colville was building a new Swimming Pool at the City Park. The club convinced the city to build a room under the new pool dressing rooms to be used as a small bore target range to support the local shooters that wanted to compete in the Winter Spokesman Review Small bore Rifle and Pistol Competition, and to be used for marksmanship training for the local Boy Scout Troop and any other groups. The City of Colville thought this was a good idea  because the club put a wood stove in the room and kept the fire going all winter to keep the water system from freezing during some cold spells. The range under the pool dressing rooms were still in use  in 1992 however it was closed shortly after 1992 because of lead dust contamination and poor maintenance by the City.
The gun club continued to grow in the 1960’s. Many of the members would take group pictures from time to time to preserve the memory of good times at the Fort Colville Gun Club. 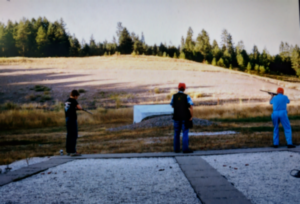 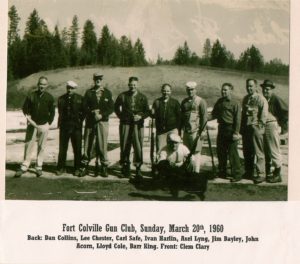 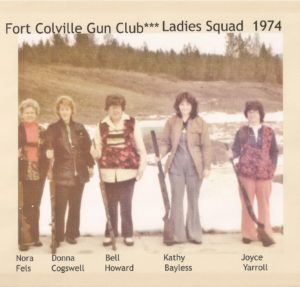 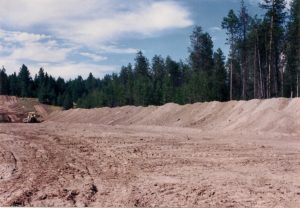 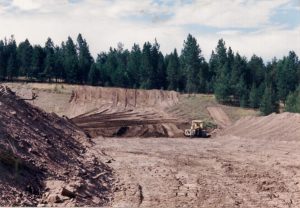 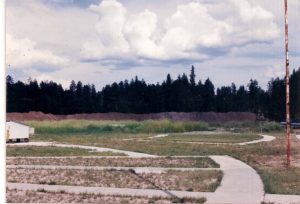 The creation of the expanded gun club was a community effort. This included a skeet field, four trap ranges, a rifle range and a pistol range. Men would come after work and help set the foundations for the sidewalks ,trap houses for the trap fields. Gone were the days of hand thrown clay targets. The new trap and skeet ranges were replaced by automated trap throwers and a voice call system. Many in the community  donated time and machinery to make the Fort Colville Gun Club one of the best ranges in Washington State.
There was a fire at the old clubhouse (about 1990 or 1991) and a new clubhouse was built through a Firearms and Archery Range Recreation (FAAR) grant and insurance that the FCGC had. 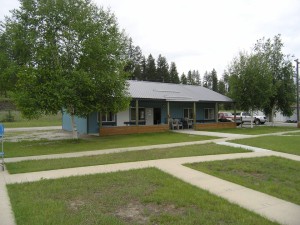 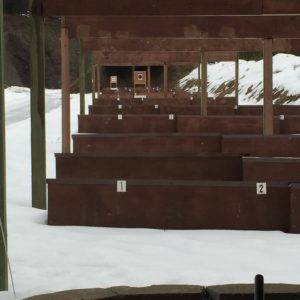